Thanksgiving, then Christmas and New Years has come and gone and we are finally settling down for a "long winters' nap" (I wish). It seems like there have been so many places to go, people to see, stockings to fill, and biscuits to make that we barely have time to enjoy the blessings we have been given. 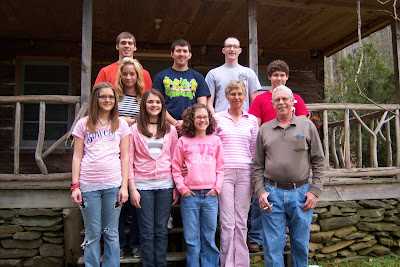 The season started with Thanksgiving in the mountains with my parents...all the grandkids were there and we had a great time (me playing family photographer), the kids playing ball with a beach ball (you use what you can find when you are 30 minutes from the closest WalMart). 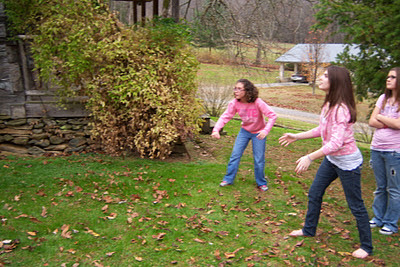 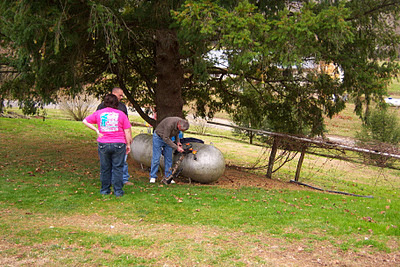 Bigger kids playing with guns and bows and arrows...every truly southern family has to practice up on their aim.

Christmas was celebrated early on the farm (well, it used to be a farm, now it's more like a large garden and apple orchard in the mountains). We all have different schedules and so many places/people to see and visit, that we decided to do it the week before Christmas so we could all be there at the same time. 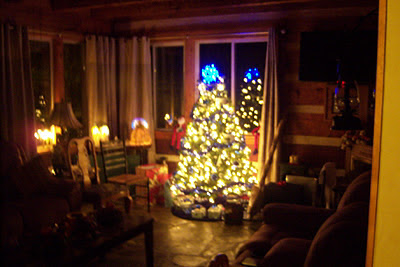 Most of mom's side of the family came, and we exchanged gifts; aunt Delfi gave Zak the greatest gift for the cold weather, which everyone in the room had to try on, and as usual Mom was the star of the cat walk with her "mean face" pose here. LOL 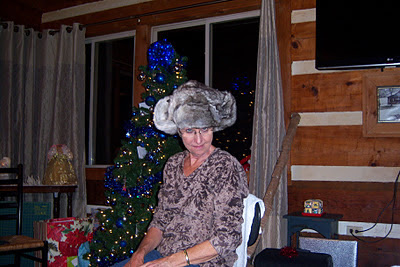 We decided what better gift than to have all the kids spend the night and let mom make breakfast for us? It probably would have been a better gift if we had cooked for HER, but we can't cook, so she would have had to have Cheerios for breakfast. Instead, we had our traditional chocolate gravy with biscuits. And for those who don't know what they are missing, she made some sausage and eggs to go with the biscuits. Yum. 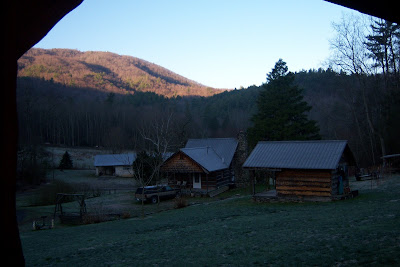 Check out the sunrise from the porch on Spicewood Flats! No white Christmas, but this made up for it.

After celebrating Christmas at home and with Jay's parents (and working through the whole thing), we decided to take advantage of Zak being home and expose him to some culture. He had never been on a vacation with us to anywhere other than a beach. And he hates the sun, so what better time to take him on a trip than during winter - and in the rain! 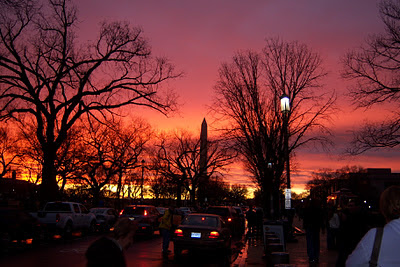 This was our first night in Washington, DC...it rained on us all the way there, but as soon as we got there, got our luggage unloaded, we decided we were going to brave the rain anyway, because we didn't have time to waste. We took a cab to the Museum of Natural History, and by the time we came out, the rain had stopped and we walked around, with this view in the backdrop. Beautiful. 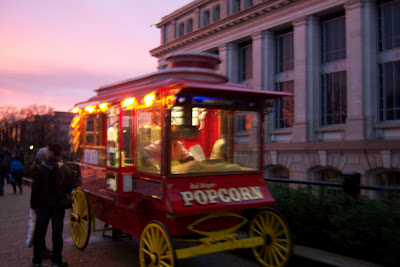 I love the little popcorn trolley. I wish I had a better photo of the lady inside, she was really bundled up. 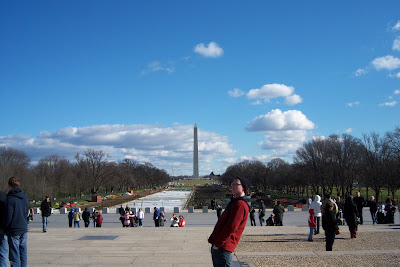 Epic Fail photo (he was supposed to be leaning on the Washington Monument). I really need to take that photography class, Patty . 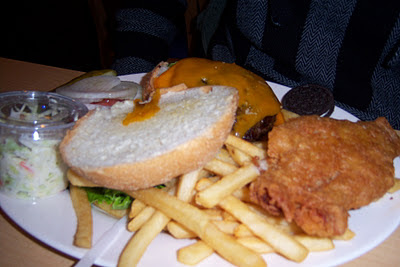 You know you can't go anywhere with me and not get lost. We walked and walked at least 4 or 5 miles and later the next day we found out we were only a block from our hotel when we ate at Harriet's. Which is around the corner from Harry's. Which is part of the Harrington Hotel, and I'm sure they share the same kitchen, but the atmospheres are completely different. Food was amazing, servings were huge, and I gained 10 pounds just looking at the plate. 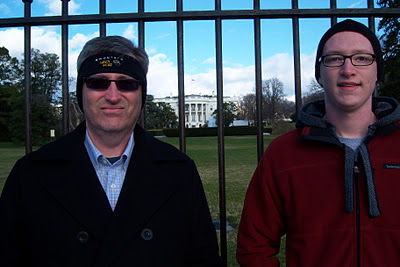 The next day, we toured the Mall area, and complained about our feet and the cold wind in our face. We must have walked (again) another 5 or 6 miles, at least. This is Jay and Zak behind the White House. The crowds were pretty bad at most of the museums and monuments. Not much different than when I was there in May. (But Traffic was fine, no offices were open the week after Christmas). 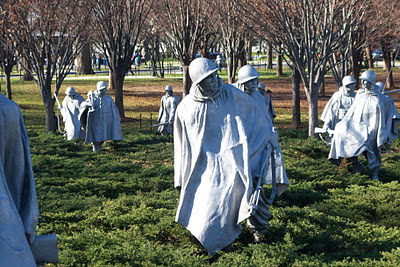 My favorite Memorial was the Korean War Memorial. Jay's dad was an MP in Korea, so this one seemed a bit special to us. 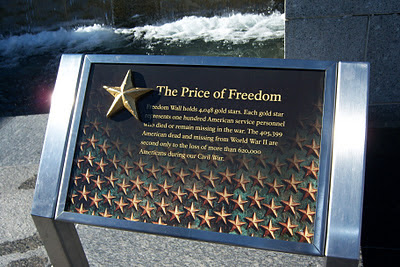 This was the World War II Memorial and this sign says there are 4048 gold stars on the wall (below) and each star represents 100 people who either died or are missing. That wall was huge, as you can imagine. 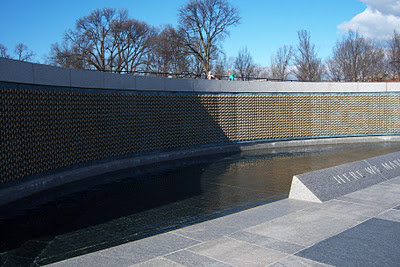 The last day, we saw more of the museums and had planned to eat at the American Indian Museum because I read online that even the locals eat there because of their interesting menu and fresh food. We skipped breakfast (big mistake) and after walking miles and miles (I'm sure it was at least 100 miles :) we went to the museum to find a VERY LONG LINE at the restaurant. We were so hungry we went back outside and got a pretzel from a street vendor, and sat on the steps of the Air and Space museum eating our pretzel without anything to drink. It's the little precious memories that mean so much! LOL (later on, we went back to the American Indian Museum and walked through the cafeteria. Of course we weren't hungry at that point, but we should have tried some buffalo anyway.) 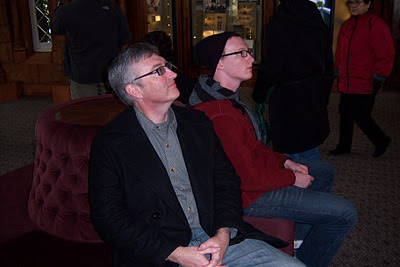 This is near the end ...getting tired and this soft round couch inside the Smithsonian Castle looked so comfy...come on boys - boys, come on, let's go! Just like the dog at home, they think if they don't look at me, I won't see them.

The Holocaust Museum was on our "must see" list, so we had to get there before they closed, and it was our last day. We made it just in time, and still had the long walk back. We were so hungry, we ate at a food court (which turned out to be great...Jay had Five Guys, I had sushi, and Zak had Indian food again).

I forgot to mention Chef Geoff's...a great place for dinner. Would definitely go back there. The prices were reasonable, and the food was amazing. Jay had home made pizza, I had crab and shrimp ravioli, and Zak had some sort of sushi that he loved. 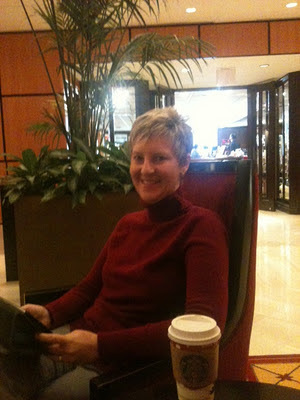 This was me, resting up inside the JW Marriott Hotel, near the White House. I do recommend this place if you are going to see the Mall area, everything is within walking distance, just don't do like us and walk in circles.

So here we are in January, just finished another 7 days of work, and am finally off for a week with no major plans, except catching up with some friends and maybe going to visit the Paula Deen Restaurant in Cherokee, NC. I'll keep you posted.

On a sad note, we lost a dear friend to cancer on New Year's Day. He loved life, was always a joy to talk to, and was an encourager. I hope people can say that about me someday...Keep track of all your memories, even those that seem mundane. Sitting on the steps of a museum sharing a pretzel may have a whole new meaning for you when those you were with are gone. Hugs to you all...and Happy New Year!
Posted by KimberFNP at 9:30 AM

You inspired me to actually down load the blogger app so I can write on my blog more :) love this post!

Thank you for commenting! Sometimes I think no one comes by; I always enjoyed looking at your posts as well. I know I post a lot of this stuff on Facebook, but this is a good place to lay it all out there, if the house burns down and computers are destroyed, these memories are still preserved somewhere in cyberspace.

A very nice travelogue indeed. Although the Capitol is anethma to me you give it a good light. For me at this time of year Colorado or New Hampshire are more fitting to the season.
I guess your visit to the capitol will be a benchmark in the coming upheaval.
Keep posting...you're getting good at it.

Kim- this is awesome! I haven't been to DC since 1990, back then we were too poor to do alot, haven't thought much about going back til now. Thanks! :)Kimberly

love your sweet memories here, kim... the photo of the wet sunset sky in DC is gorgeous... and love that stacked stone porch!! and zak's hat!! :))

hope you had a wonderful holiday and um.. next time you have a week off? um... yeah, i'm stil there, waiting for you to come back! ;)